Goat is known as poor man’s cow in India and is a very important livestock in dry land farming system. Marginal or undulating lands are unsuitable for other types of animals, like cow or buffalo, but are suitable for goats. With very low investments, Goat Farming can be made in to a profitable venture for small and marginal farmers. Goat Farming is done by us ensuring high standards of health and hygiene management. Our goats are demanded for their better milk production and excellent breed. 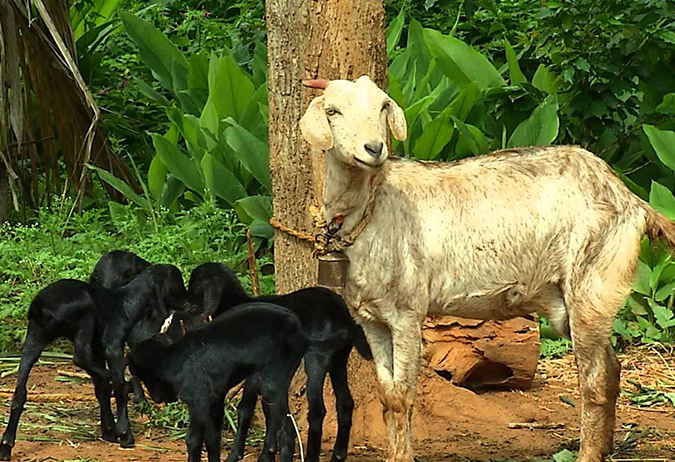 Sirohi goat breed is considered as the profitable breed for rearing in the goat farm. This goat breed is from Sirohi district of Rajasthan. This is mainly reared for the meat production.The sirohi breed also can be seen in the adjacent cities of Rajasthan state mainly in Jaipur,Ajmer and Uttar Pradesh.

Generally this breed of goat is raised for the meat production though the milk yielding is comparatively less. Average milking per day ranges from 0.5 – 0.7 liter.This breed is well adapted to the hot and dry climatic condition of Rajasthan. Sirohi Breed can only be kept under the stall feeding system.The average body weight of an adult male is 30 kg and female is 33kg.

Generally Sirohi goat gives birth twice a year single and twins are quite common triplets are very rare.Sirohi goat starts its first kidding at the age of 18 to 20 months. The newly born kid weight usually ranges from 2-3 kgs.

Jamunapari goats are generally large animals with curved nose similar to parrot mouth appearance also know as Roman nose. It is found in different color variation but usually it is found in white color with small dark patches on head and neck. The jamnapari goats usually have long hair on the back leg and it has long drooping ear usually 8-12 inches long . Both male and female have horns this breed can attain the maximum weight of 125 kg and the doe of 90kg.

Reproduction: Jamunapari goat starts its first kidding generally at the age of 24month that is 2 year and the kidding interval is usually 7-8 months.usually they give birth to singles and twins whose percentage is 56% single and 44% twins the chances of triplets are very rare.The kid weight generally ranges between 4-5kg they show the rapid growth and gain the weight of 16 kg at the age of 6 months and 24 kg in 9 month. Jamunapari goats usually considerd as an adult at the age of 12 month and gain the weight of 29.6 kg. There growth rate also varies according to the feed supplied to them. Growth rate would be rapid when the true concentrate percentage in fodder is supplied.

Barbari is a beautiful medium range goat breed. Its white color and beautiful brown patches all around its body enhances its beauty and it looks like deer in appearance. Basically barbari goat breed is the origin of Berbera Somalia of East Africa. In India it is found in the state of Uttar Pradesh and Punjab provinces specially in the north western India and Pakistan.

This breed is also raised for its meat production and there meat conformation is considered as good in quality. Barbari goats are also known for its early maturity and triple kidding are quite common in this breed. This is the medium size goat breed with short ear, twisted pointed horns with bulging eyes which increases its beauty naturally.

The Beetal Breed of goat is also considered as the very profitable breed to raise in the commercial goat farm. This breed has very good milk yielding capability after Jamunapari. The Beetal goat is the large animal and considered as the dairy goat breed. There skin are of very good quality for making leather goods which has demand in the market.

Beetal goat is more adaptable to the different climatic condition and also suitable for the stall feed system. Beetal goat is the breed of Punjab and Haryana region of India and Pakistan also called as Amritsari goat. However true breed of Beetal is found in the Amritsar, Gurdaspur and Ferozpur district of Punjab.

Beetal is the large animal with an average male body weight of 45-50 kg. It is found in brown or black with various round white spot in the body. Though the majority of Beetal goats are black in color among them the brown Beetal percentage is less as compare to the black beetal. Its a true resemblance of the Jamunapari goat with convex face and Roman nose. They too have drooping ears which is long and flat both male and female have thick horn of medium size

Beetal goat has small tail and there udders are well developed with perfect conical teats which makes them a true dairy goat breed.

Osmanabadi goat breed is from the Latur and Osmanabad district of Maharashtra. This is the tall animal usually black in color. Osmanabadi goats are well known for there disease resistance capability, their disease resistance as compare to other goat breed is more hence considered as the good breed for commercial goat farm. Also the milk yielding ability and the reproduction is very good in this breed usually they give birth twice year and twins are very common.